Home » “Everything is still possible.” An Interview with Israeli Parliamentarian Mossi Raz

“Everything is still possible.” An Interview with Israeli Parliamentarian Mossi Raz

Israeli citizens voted on March 23 for the fourth time in two years. What is happening now?

The elections are currently about, “Netanyahu: yes or no.” In the elections we had a few kinds of parties. We have Left-wing and we have Right-wing and Center, but it was more about Netanyahu.
The first kind of parties are Right-wing parties, who support Netanyahu. They got 52 out of 120 seats in the Knesset so it was not enough for him.

The second kind is a small party that is Right-wing but they didn’t say if they support Netanyahu or if they are opponents.
And then we have people who voted for parties who said “we will not cooperate with Netanyahu.” Two of them are Right-wing parties and the others are Left and Center.
And we have 4 people who voted for the Islamist party who is going to decide now who is going to be the Prime Minister.

In these four elections Netanyahu couldn’t form a coalition to get a majority. Why? What happened?

Mr. Netanyahu is, on one hand, very popular among half of Israelis. He is Right-wing while most of his rivalries are Right-wing. He has a lot of support; but on the other hand, because of his corruption, many parties are not willing to cooperate with him. So what happened in the first round? He was very close, but he couldn’t manage.

The surprise was when one of the Right-wing parties—the party Yisrael Beiteinu, meaning “Israel is our home”—said that they will not cooperate with Netanyahu. Nobody expected that before the elections, because they were Right-wing parties.

The joint party comprised of Palestinians split on this difference too: the United List said “No, we are against Netanyahu.” Then, the Islamist party left them, saying, “We are not in anybody’s pocket. We are willing to go with Netanyahu or with the opposition leaders who are giving answers to our problems.”

The Blue and White party were divided into two parts after the last elections in 2020. Half of them went to Netanyahu’s government, and then they lost seats. The half who stayed in the opposition maintained the same power as in the past, about 18 seats. This is a party led by people who left Netanyahu’s party, but said, “We are not going to cooperate with Netanyahu anymore because of the corruption.” Other Center-Left voters went to this Right-wing party who said “no” to corruption.

Until these elections, they was only one side, the Left side, opposing Netanyahu. But we have a new game now. We have a party, the Islamic party [Ra’am], who says, “We are willing to cooperate with Netanyahu. We are willing to cooperate with others. We fight for our rights. If Netanyahu gives us our rights, maybe we should go with him.” This is new. This is completely new. Once, Palestinian citizens of Israel were under a kind of a boycott, nobody wanted them in this coalition. The positive thing is that now, Netanyahu is talking about them. He is legitimizing them. So the leader of the Right-wing is doing that. Which is important.

Here is the problem now: it is very hard to predict who will go with Netanyahu and who will not; and it is not Right-wing and Left-wing anymore, but it is more, “Are you for Netanyahu or against Netanyahu?” And then we have all the old differences. It is a combination of so many boycotts: this party boycotts this one; this one is boycotting this other one; and half of them boycott Netanyahu, which makes this situation impossible.

Concerning the fact that you are a member of the Left-wing party, what do you think are the most important things to think about in Israel?

We have a commitment to bring an end to Netanyahu’s prime-ministership; Secondly, we have a commitment to human rights, meaning to end occupation, to fight against human rights violations in occupied territories, and to fight for the rights of the Palestinian people of Israel and for the LGBT community. We are also very committed to the environment, to social justice, to environmental justice and so on. But the first issues I mentioned  are our priority right now.

Do you think that there are some issues that you hold in common with other parties? Just to make an example, how to face the post-pandemic situation.

The real answer is “not really.” Today in the Israeli economy and Israeli politics there is no real difference between the economic Right-wing and the economic Left-wing. More or less they say the same things. The main difference between parties is the way they regard the Palestinian issue.
Meretz, my party, is a Left-wing radical party, and more active vis-a-vis the occupation and vis-a-vis the Palestinian citizens of Israel.

What about the so-called “Arab-Israelis”, the Palestinians with Israeli citizenship?

What is the Left about? Left is about justice. The main injustice in Israel is that the Palestinian citizens of Israel don’t really have the same rights like the Jews. By constitution the answer is yes, but not de facto. We try to lead a kind of a party with, I would say, half of the party being Jewish and half of the party Arabs, Palestinian citizens of Israel. We are saying to the Palestinian society, “You are partners. We want you to be with us. We are with you.” 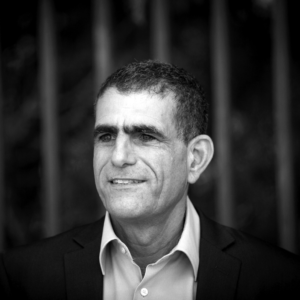 Not Even a Whole Century of Peace: The Testimony of Rayan Atto, a Chaldean Priest