The State of Israel is a democracy with a unicameral legislature, the Knesset, whose 120 members are elected to 4-year terms through party-list proportional representation. Knesset seats are allocated among parties using the D’Hondt method of party list proportional representation. Parties select candidates using a closed list. Thus, voters select the party of their choice, rather than any specific candidate. Israel requires a party to meet an election threshold of 3.25%. This means that seats in the Knesset are allocated across all parties fielding candidates who receive a minimum of 3.25% of the vote. To have an absolute majority in parliament, a party would have to get 61 seats, but this has never happened in the parliamentary history of Israel. On the contrary, it has always been necessary to form coalitions between the various parties. Elections should be held every four years.

1988: Elected a member of the Knesset by Likud and subsequently appointed Deputy Minister for Foreign Affairs.

1996: Elected Prime Minister of Israel, defeating incumbent Labor candidate Shimon Peres. He holds office until 1999 and serves as Prime Minister until 1999. During his tenure, he signs the Hebron Accords and the Wye River Memorandum.

1999: After the defeat against Labor candidate Ehud Barak, Netanyahu temporarily leaves politics and works in the private sector.

2005: On 9 April he resigns in protest against the plan to withdraw from Gaza. On December 20 he regains leadership of his party after Sharon leaves Likud to found Kadima. In December 2006, he became the official spokesman for the opposition in the Knesset and is President of Likud.

2015: Wins the elections in mid-March, defeating Isaac Herzog of the Zionist Union alliance.

2017: It is revealed in August that Netanyahu is one of the suspects in four investigations on charges of “fraud, breach of trust and bribery.” The first investigation—Case 1000—concerns his acceptance of gifts from two prominent businessmen (Arnon Milchan and James Packer); the second—Case 2000—concerns his alleged attempt to obtain more favorable media coverage from a newspaper (Yediot Ahronoth); the third—Case 3000—concerns the accusation of corruption in the context of the purchase of German military submarines by the State of Israel; finally, the fourth—Case 4000—concerns the manipulation of the Walla! website by Bezeq Israel Telecom in order to put the Prime Minister’s work in a good light in exchange for facilitations with the communication regulators.

Also in 2017, Likud proposes a bill according to which, at the end of the investigation, the police could no longer disclose their conclusions to the public; the prerogative for such a disclosure would be reserved to the legal adviser of the current government. This proposal arouses negative reactions from opponents as it is intended as an attempt to protect Netanyahu from a potentially unfavorable outcome of the investigation. On December 2, a few days before Parliament ratified the bill, opponents hold a mass demonstration in Tel Aviv involving around 20,000 protesters. The following day, Netanyahu says he instructed his political allies to rewrite the bill so that it would not appear to conflict with his ongoing investigation. The bill is subsequently withdrawn.

2018: On February 13, Israeli police say there is sufficient evidence from ongoing investigations to indict Netanyahu for corruption, fraud and breach of trust.

2019: Attorney General Avichai Mandelblit announces his intent to proceed with charges against Netanyahu. During the April elections, the two main parties, Blue and White and Likud, receive an equal number of 35 seats. Although Netanyahu is commissioned to form the government, the coalition fails and the Knesset is dissolved shortly thereafter. In September 2019 there is a new election. This time Blue and White outrun Likud by a single seat but Likud receives support from a Knesset member and Netanyahu is again tasked with forming a new government. Again he fails, but—unlike during the first round—in this case he cannot dissolve the Knesset. Therefore the mandate passes to Benny Gantz of Blue and White. He too fails to get a majority and the Knesset is dissolved again shortly thereafter.

2020: New elections are held in March. This time the Likud wins more seats (36) than Blue and White (33), but Gantz receives more recommendations from potential Knesset allies by receiving the mandate from the president. However, he doesn’t win the majority this time, either. Following the refusal by the former president of the Knesset Yuli Edelstein to call a vote to appoint a replacement, a constitutional crisis opens, at the end of which Edelstein resigns and Gantz becomes the new president of the Knesset with the support of the Likud party. This support from the Likud leads to a split between Blue and White. On April 20, 2020, Likud and Blue and White agree to a government of equal unity, which includes a “rotation agreement” between Gantz and Netanyahu to share the office of prime minister. Gantz should assume office in November 2021.

However, after the failure to pass the new budget law in December, the ruling coalition shatters, Parliament is dissolved and Netanyahu ferries the government until the elections of 23 March 2021. This is the fourth round of elections in the space of two years, occurring also during the COVID-19 pandemic.

The election results of 23 March confirmed a stalemate which can only be overcome with a coalition government. 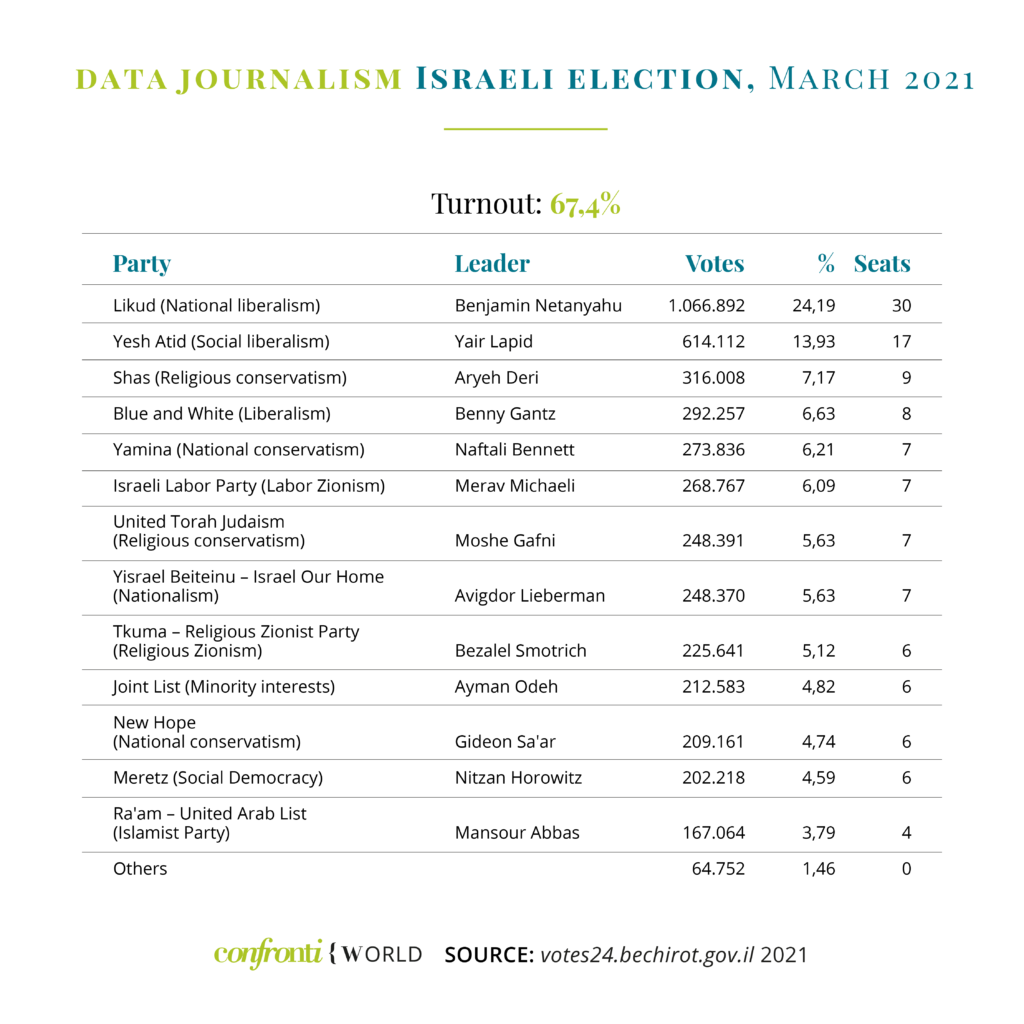 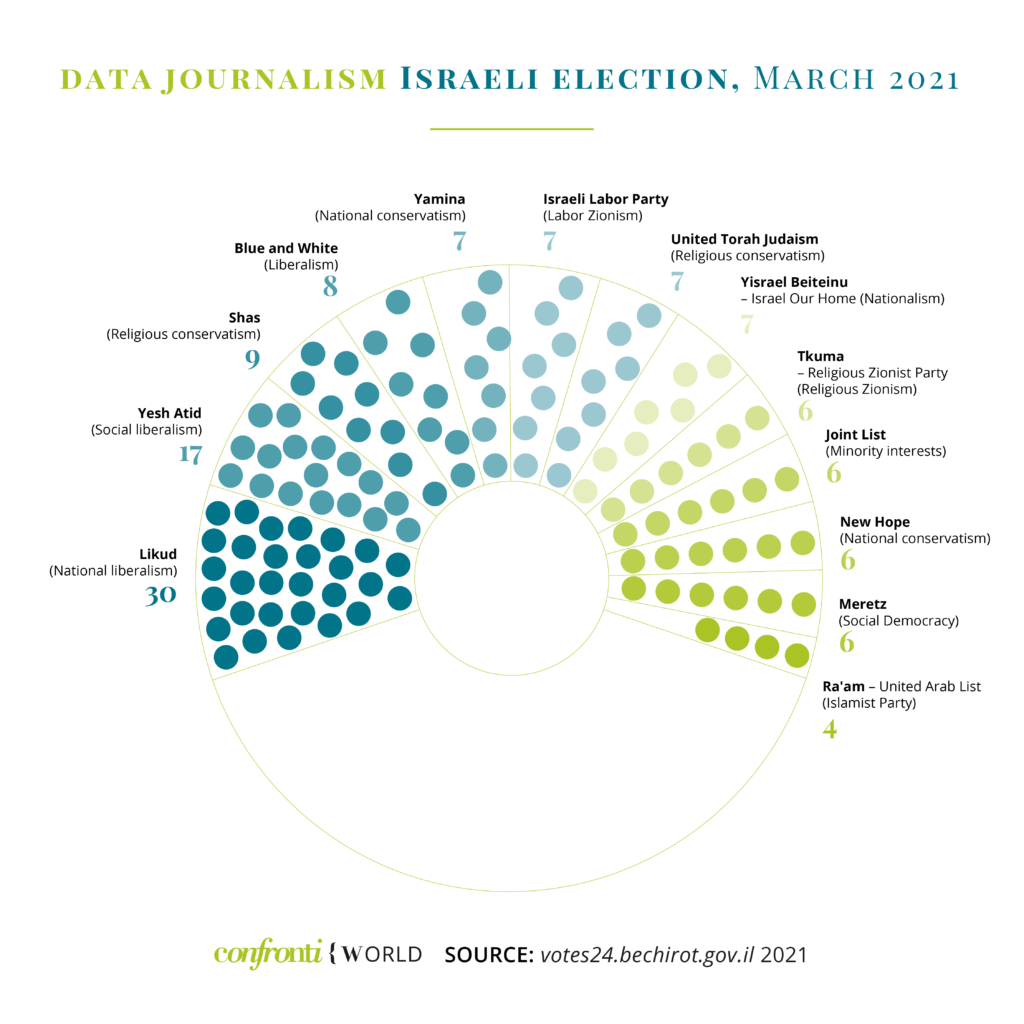 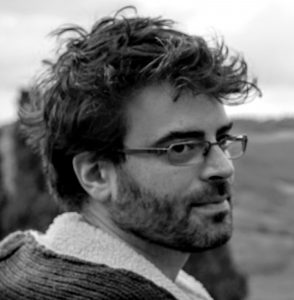 “Everything is still possible.” An Interview with Israeli Parliamentarian Mossi Raz

“Everything is still possible.” An Interview with Israeli...