Home » Islamophobia in Europe and Italy

Islamophobia in Europe and Italy

The term Islamophobia means hostility, fear or hatred towards Islam, Muslims, and Islamic culture in a prejudicial manner, and also active discrimination against Muslim groups or individuals. Islamophobia thus defined is a motivating aspect of hate crime, and manifests itself through individual attitudes and behaviors, and also at an institutional level.

Regarding the arbitrariness of the use of words, the “Carta di Roma” association showed that, in order to instill Islamophobic terror in a community, newspapers are more less likely to use the word “terrorist” to identify perpetrators of acts of illegitimate violence if the criminals are more stereotypically “Western.”

The Muslim population in Europe

According to the Pew Research Center, the Muslim population in Europe (understood as a geographical unit, excluding Turkey) in 1990 was made up of about 30 million people, which later became 44 million in 2010 and is estimated to reach 58 million by 2030. As a percentage of the total population, population numbers went from 4.1% in 1990 to 6% in 2020 to reach 8% in 2030. As regards the European Union, in 2010 there were about 19 million Muslims, equal about 3.8% of the total population.

Faced with these numbers, as a survey by the British research institute IPSOS MORI reveals, the majority of people (in Europe and beyond) have an incorrect perception (projected in excess) of the percentage of Muslims living in their own country.

A 2017 study by the Pew Research Center found that between mid-2010 and mid-2016, migration was the main pull-factor in the increase in the Muslim population in Europe. About 2.5 million Muslims (mainly from Syria and other Muslim majority countries affected by conflicts) have come to Europe for reasons other than employment and education. The study also notes that over 1.3 million Muslims have received (or are waiting to receive) refugee status during this time, which allows them to remain in Europe.

In the 2019 Annual Report of the European Commission against racism and intolerance (which already in 2000 expressed concern about the danger of Islamophobia), we read that

“Europe is facing a terrible reality: crimes generated by anti-Semitic and anti-Muslim hatred, as well as other forms of racial hatred, are multiplying at an alarming rate.”

In particular, the Report says, in many Member States xenophobic nationalism continues to express itself in an Islamophobic sense, often portraying Islam as a “foreign” religion, in contrast with the culture and elements that make up national identity. This rhetoric is often only the first step towards the exclusion of and discrimination against Muslims, which stands in stark contrast to the universality of human rights that the EU guarantees. It also contributes to making Muslims who bear visible signs of their religion particularly vulnerable. The hate speech thus becomes incitement to hatred and ultimately violence. Furthermore, intersectional discrimination only makes matters worse for minorities in minorities such as, for example, black Muslims or Muslim women.

From this point of view, Islam is “in itself” an intrinsic threat to culture—beyond the religious dimension—and to the European lifestyle. Therefore, the myth of the “Islamic invasion” and the consequent “Islamization” of Europe was promoted by many parties that recognize themselves in the xenophobic discourse. 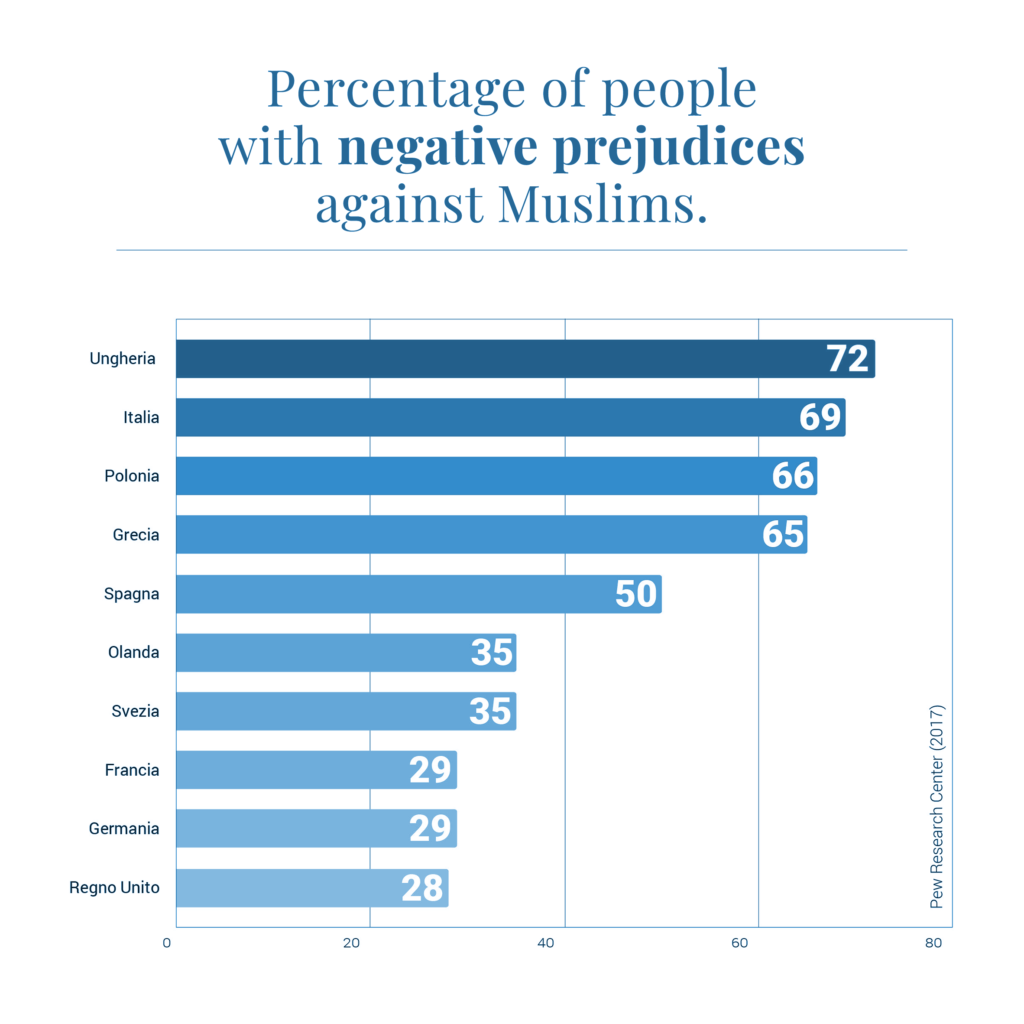 Guess Who’s Coming to Dinner? If the family member is a Muslim

According to a 2019 Pew Research Center study, the vast majority of people in 15 Western European countries and the United States say they would be willing to accept Muslims as neighbors. Things change on both sides of the Atlantic, negatively, with respect to the possibility of accepting a Muslim as a family member. In both perspectives, Italy is lagging behind. 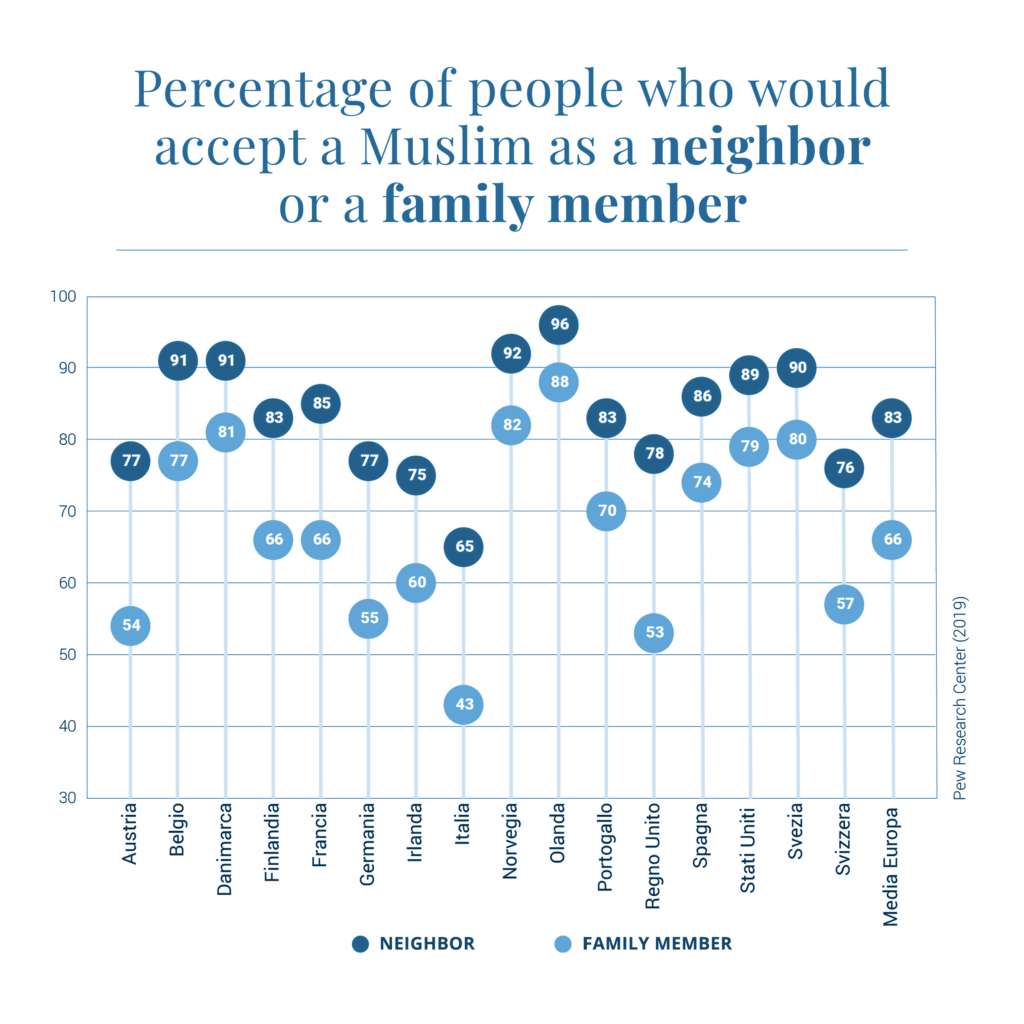 In the “Islamophobia in Italy” dossier, a national report released by the SETA Foundation in April 2018, it is noted that “the xenophobic and anti-Islam climate fueled by the traditional political actors of the right, Lega Nord and Fratelli d’Italia, of the far-right movements (Casa Pound in Forza Nuova) and from the more conservative sectors of the mass media, such as Il Giornale, has had very negative effects on a social level by legitimizing racist behavior. Physical and verbal attacks against migrants, asylum seekers, refugees and Muslim citizens have increased both in the North and in the South, leading to dramatic events.”

Furthermore, according to a 2019 study by the NGO Vox Rights in Italy, Islamophobia is confirmed in “pole position” in the online hatred ranking. Inflaming this discourse are international events such as attacks, and the consequent narration that certain politicians give about these events.

Speaking of politics, Amnesty International’s 2019 Hate Barometer is entirely dedicated to the 2019 European Elections in which the hate speeches present in the social media profiles (Facebook and Twitter) of the candidates in the last election campaign were monitored. The parties that were most exposed as delivering declarations of hatred were the Northern League (51% of the declarations), and the Brothers of Italy (27%). Migration was mentioned in 91% of the cases collected, while the discourse linked specifically to Islamophobia stood at 11%. Speaking only of hate speech, Muslims are the most targeted category, with an incidence of 19%, followed by migrants and refugees with 15.5% and women with 8%.

Compared to the situation observed in 2018, mistrust of religious minorities and in particular of Islam, a religion increasingly associated with “terrorism,” has consolidated. The Islamophobia present in the speeches of certain Rightwingers is also associated with fear from other sectors of politics, in which Islam is seen as a possible obstacle to the progressive demands of feminist and LGBTQIA movements.

Research conducted in 2018 about the European Work Force by the human resources company ADP showed that Italy has the highest rate in Europe of workers discriminated against on various bases (42%, while the European average is 34%), while 4% of the Italian sample (1,300 interviewed) declared that they were discriminated against because of their religion (mainly the Islamic religion).