Home » The Burden of The Departed

by Velania A. Mesay. Reporter and scholar from the Horn of Africa

In Suceava, a few kilometers from the border with Ukraine, there is a hotel that hosts refugees transiting through Romania. Many of them, instead of feeling relieved, are flooded with guilt.

The Mandachi  Hotel stands on the side of a roadway in the middle of a wasteland a few kilometers from the city center. It is one of those luxury hotels that offers its guests services such as a spa, wellness center, swimming pool and casino. The owner of this hotel—in the aftermath of the outbreak of the conflict in Ukraine and the beginning of the ongoing exodus of thousands and thousands of refugees—has decided to transform the restaurant of his hotel into a temporary refuge for those who, after days traveling, look for a safe place at no cost to rest before getting back on the road. To date, more than 130,000 people have crossed the Siret border, a few kilometers from Suceava. Thousands of them rested in this room previously used as a refectory, dance floor and conference center. The tables, chairs and decorations that adorned the huge restaurant room, which opens after climbing a few steps at the back of the hotel, have been replaced by mattresses lying on the ground a few centimeters away from each other. The large room is always crowded: many children playing, many women and fewer men. The drawings and writings of Romanian children who welcome their new Ukrainian friends hang on the entrance window. Two tables contain food, diapers and other basic necessities which refugees can use for free.

Welcoming us is Ana, one of the volunteers who has decided to provide first aid to the many who cross the threshold of this hotel. When she learned that the war had begun, she stopped attending classes at the University of Suceava, where she is enrolled, and came here. Ana is just over twenty years old, she is Ukrainian, from Cernivci. “I feel the duty to lend my help to my compatriots in the country that welcomed me as a student too.” We ask her about her family. “Cernivci has not yet been touched by the war, but we cannot know what will happen in the next few days. I tried to get my parents to come here but they refused. They say they don’t want to leave their home, their homeland.”

In a dark corner of the former restaurant we meet a group of elderly people. In Kiev, they were neighbors. “It took us three days to get here, and thank God we’re safe and sound.” Sergej tells me sitting on the carpet and continues: “A friend of my wife, who lived in the same neighborhood as us, started driving to escape the Russian bombing but the shrapnel reached her. She lost both legs and bled to death in the car seat. She is still lying in that car and no one has been able to bury her body to date.”

Not being able to have celebrated a worthy funeral is the greatest regret of this group of retirees who, comparing stories each other, still wonder if they were right to leave. “Maybe we should have waited at least for the burial of our friend,” the older one asks worriedly. Add to this the pain and concern for those who are still there.

Alina, Sergej’s wife, comes close to tears when she tells us that her two grandchildren were unable to come with her. Too young to be drafted and too old to leave the country. “So what are they supposed to do there!? Wait for bombs to rain on their heads while their lives await indications from the army?” They look out the window disconsolately. They are convinced that they will soon be able to return to their country. “We want to die in our land,” they tell us. “And we want to bury our friend. She did not deserve this fate.”

The four are headed to Milan, where they will be hosted by a relative who has worked in the city for fifteen years as a caregiver. Interrupting our conversation is Anastasia, who approaches in need of sharing a confidence. She invites us to sit on her mattress, paying attention to her cat hiding in her blankets. She looks into space and pretends to light a cigarette which, during a conversation of an hour and a half, she will never light. “Do you know what they call us who have escaped?” Anastasia rants. “Rats! We are rats to them…” And she bursts into weeping that she seems to have held back for days. Anastasia is from Sumy, a city in the north-east of Ukraine fifty kilometers from the border with Russia.

A week ago came the difficult decision: she and her mother understood that it is time to leave, that the city is about to be surrounded, and that it no longer makes sense to wait for things to improve. They enroll in the lists for the humanitarian corridors. They wait a few days until the call arrives: “tomorrow at 8 they will be waiting for you at the bus station.” They put Sonia, their kitten, in a basket and get on the bus.

Ludmilla, a nineteen-year-old family friend, is also going with them. “Her mother entrusted her to us. She and her father cannot leave because they have to take care of their parents who are too old to undertake such a journey.” And there are many elderly people who give up fleeing and remain trapped in besieged cities. “That is why some of those who remain in Ukraine call us rats. They tell us, “and when all of you are gone, who will take care of our country? Who will look after your parents? You are traitors.”

As Anastasia brings these comments back to us, she starts sobbing. She, like others who have managed to escape, lives in guilt. She attempts to justify herself repeatedly and she seeks forgiveness in her confession, as if it were the others who could absolve her of a fault that is not a fault. “Sumy is not Mariupol,” she repeats to me to emphasize that she has escaped not from a battered city, but from one where the fighting was less ferocious than in those where her friend Svetlana lives. “My best friend is from Mariupol and she hasn’t seen sunlight for two weeks because she took refuge under a subway station to escape the intense bombing.” And she continues: “I wasn’t in those conditions in my city. Yes, you could hear the artillery shells near the house, the sirens that warned the raids, but putting myself in the corridor of my condominium, I managed to escape it. After all, perhaps, I was not so much in danger.” And she continues: “And yet, I think we finally decided to run away because our nerves were failing. We could no longer bear that everyday life made up of waiting, lying on the floor, hanging up on the phone to read all the news, without knowing when this nightmare would end.”

She tries to comfort Anastasia for choosing her, as if having the war at home were not a reasonably enough reason to decide to leave. In Sumy, 18 civilians were actually killed by the intense bombing just two weeks ago. The city is now almost totally surrounded by the Russian army and food is scarce. Humanitarian aid agencies are also unable to enter.

Despite this, Anastasia continues to apologize for her decision. “I hope that one day they will forgive me. I hope that one day I will be able to forgive myself.” Now she and her mother are on their way to France. One couple, two regular customers of her online shop, did not hesitate to write her an email a few days after the news about the outbreak of the conflict spread, inviting Anastasia and her mother to join them in Nantes where they live. 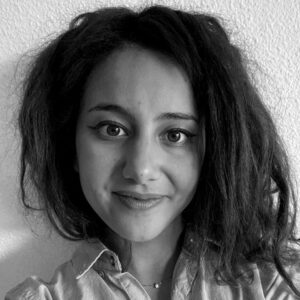 Reporter and scholar from the Horn of Africa