Home » Centootto. The Story of a Film

Separated from Tunisia by just under two hundred kilometers, Mazara del Vallo is a small town in the far west of Sicily that has just over 50,000 inhabitants and whose history is inextricably linked to fishing. In particular, the red shrimp Aristaeomorpha foliacea, which is the flagship of industrial fishing in Italy. The red shrimp, in fact, cannot be cultivated and is fished on the seabed at a depth between 200 and 1,000 meters using the trawling method. Peak catch is concentrated in late spring and summer, from May to September. Before the advent of technology that allowed fishing boats to equip themselves with adequate refrigeration systems, the red shrimp was difficult to market due to the rapid degradation it suffered during transport. And it is precisely in Mazara del Vallo that the on-board freezing techniques were developed and where, starting from the beginning of the twentieth century, the prestigious and profitable commercial adventure of red shrimp fishing begins. 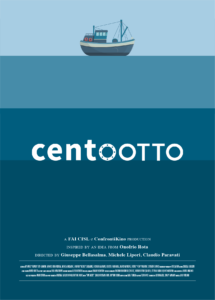 During the “Golden Years”—ranging from the late forties to the nineties of the last century—Mazara has about 1,300 fishing boats equipped with this technology, specializing in deep-sea fishing for this particular crustacean. In those years the Mazara fishing boats traveled long stretches of sea, even going beyond the Strait of Gibraltar.

Today, mainly due to the increase in operating costs (fuel prices, etc.) but also to the impoverishment of the seabed, about sixty of those fishing boats remain and the red shrimp fishing takes place—over fishing trips of about forty days each—increasingly on the deep bottoms of the Mediterranean Sea, in international waters often close to the Libyan, Tunisian, Cypriot and Turkish coasts.

THE WAR OF THE RED SHRIMP

But “good neighborly relations” are not always guaranteed, especially since competition from other Mediterranean countries has resulted in a real “war on the red shrimp.” To understand the extent of this “competition,” just think of the fact that—according to data released by the Sicilian Fishing District—in the last 25 years, more than 50 vessels have been seized and two others confiscated, with the relative arrest of over 30 Italian fishermen. Seizures, often carried out in order to obtain a ransom, are operations that are not without risk: indeed, dozens of Italian sailors have been injured in such circumstances.

A situation that has been further exacerbated since 2005, when Muammar Gaddafi unilaterally decided to extend Libyan territorial waters from 12 miles off its coast—the limit set by international standards—to 74 miles, in order to claim the exclusive right to the exploitation of fish resources in that stretch of sea.

This reality, already critical in itself, could only worsen with the crisis that arose in Libya from the popular protests of 2011 which then—due to the violence of the government repression—resulted in an armed conflict that led to the deposition (and then killing) of Gaddafi himself.

From 2014—and until March 15 this year, when the new government of national unity led by Abdul Hamid Mohammed Dbeibeh was proclaimed—Libya split into two rival entities competing for legitimacy, government and control of the territory: the government headed by Fayez al-Serraj and the one loyal to Marshal Khalifa Haftar.

It is in this context that the story  unfolded, of the Mazara fishermen caught on September 1st, 2020 while they were off the Libyan coast for red shrimp fishing. The kidnapping lasted one hundred and eight days, until December 17, and involved two fishing boats—the Antarctica and the Medinea—and 18 fishermen in total. 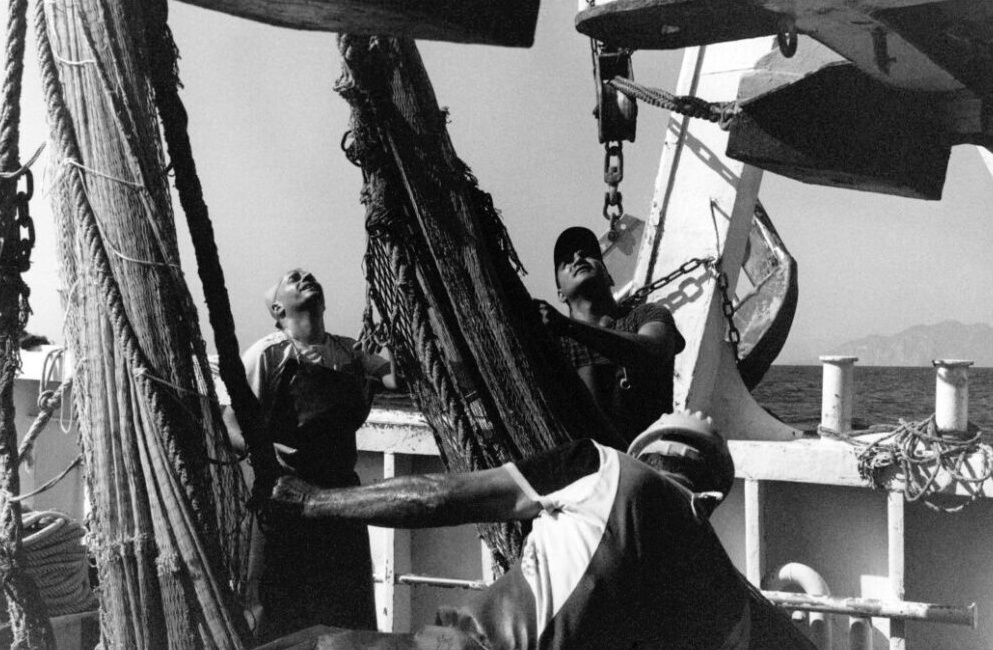 The documentary film Centootto, produced by FAI CISL and Confronti Kino—the newborn audiovisual production house that belongs to Confronti—retraces the stages of this kidnapping, with the consequent imprisonment in the galleys around Benghazi, the then-stronghold of General Haftar. The film aims to convey the point of view of the people connected to Marco Marrone’s fishing boat Medinea, namely, the crew and family members.

The film recounts the story of the “ordinary” absence, an integral part of the maritime profession, punctuated by an “exceptional” absence—that of imprisonment, during which the sailors suffered intimidation, beatings and psychological violence carried out by Libyan jailers.

THE TALE OF AN ABSENCE

The seafarers who make up the Medinea crew, like all those involved in red shrimp fishing—and their family members as well—are, in fact, accustomed to absence. Each fishing trip lasts about forty days and the break on land between one trip and the next is just four days. Onboard the work is almost continuous, but the sailors always manage to carve out moments to stay in contact with their loved ones through the mobile phone, at least in the sea areas covered by the telephone service. It is not much, but it is enough to mitigate the nostalgia of one’s affections and to calm the souls of those on the ground, at least for a short moment.

The days when the sailors are ashore represent a real “day of celebration” for families. It is in those few days that we can meet, that we tell ourselves about domestic matters, in which we take in the growth of our sons and daughters.

There are three family groups that talk about each other in Centootto. The first is made up of Pietro “Piero” Marrone, the commander of the Medinea, and his mother Rosa “Rosetta” Ingargiola. Rosetta has an ambivalent relationship with the sea: all the men in her family have chosen to pursue a career as a seafarer, answering a seemingly irresistible call. Rosetta’s husband stayed faithful to his choice—a passion as well as a profession—despite his illness, which quickly removed him from the affections of his wife and children. But it is an accident 25 years ago in which her eldest son Gaspare perished that makes Rosetta fearful of the sea to the point that even today she is unable to watch it on stormy days. The relationship between Rosetta and Piero is very close, strong with joy and care, but at the same time it is tinged by what the sea has taken away from them. Piero, despite everything that has happened, never escaped from the life he learned to savor and love, alongside his father and brother. 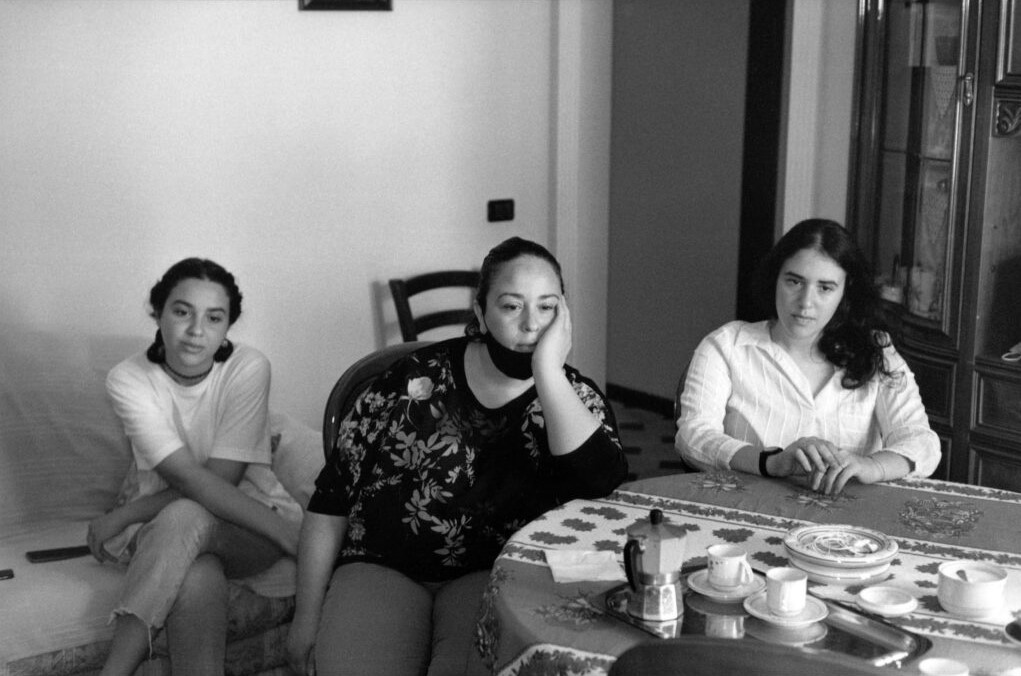 Then there is the family consisting of M’hammed “Franco” Ben Haddada, his wife Monia Ghoul and three daughters Naoires, Islem and Dorsaf. Franco was born in Tunisia and has not always been a sailor. With his wife he moved to Sicily about 40 years ago, near Mazara del Vallo where there is a large Tunisian community; it is the only European city where the song of the muezzin can be heard echoing in the streets. Before embarking upon the Medinea, Franco was a worker. Then, with the birth of his first daughter, Franco opts for sea. His daughter is called Naoires, which in Arabic means “seagull.” Her name was chosen precisely because, like a seagull, she too was free to live on both shores of the Mediterranean.

Medinea has been Franco’s second home for years, a house where no one is a stranger and where everyone—despite their diversity—is “equal” to others, because equality is crucial to the success of the job. Then, we find Onofrio “Nuccio” Giacalone, the “engine engineer” of the Medinea—the second most important position on board, after the captain—and his wife Rosaria and daughters Monica and Melissa. Nuccio’s story is the one that focuses most on the difficulties of imprisonment, the most despairing of uncertainty about one’s own destiny, and that more than any other illustrates the fatigue of this experience. His story, in fact, is the counterpart to the many testimonies reported by those in Libya who have suffered all kinds of violence—physical and psychological—to reach European coasts in the hope of a better future.

Rosetta, Monia, Rosaria, Naoires and Monica, in different ways, played a decisive role in activating the protests aimed at raising public awareness and demanding a resolution from the institutions. Mothers, wives, and daughters, of different ages and cultures, united together to give strength to a movement that, from the grassroots, demanded justice for the sailors, kidnapped while they were doing their jobs.

These stories were collected and directed by Marco Marrone, the owner of the Medinea; Salvatore Quinci, the mayor of Mazara del Vallo; and by Silvano Giangiacomi, trade unionist of FAI CISL. Marrone acted as a glue between the community of family members of the Mazara fishermen and those coordinating the protest in Montecitorio; Quinci proved that the institutions are able to “listen” and therefore act in favor of the citizens; and Giangiacomi supported, both morally and legally, the ongoing battle.

The Shallow Bay: One Hundred Days in Libyan...