Home » India by the Numbers

In the last census drawn up by the Indian government (2001), the Indian population in India was 1,210,193,422 people. The 2011 Indian census was the second largest ever, surpassed only by China’s the previous year, representing a huge economic effort at a cost of $439 million. India’s demographic growth rate now stands at + 0.99% which—albeit much higher than many Western countries (in Italy it is equal to -0.15%)—records a significant slowdown compared to recent decades. The main drivers of this trend are increasing urbanization, rising levels of education (especially among women), and poverty reduction. 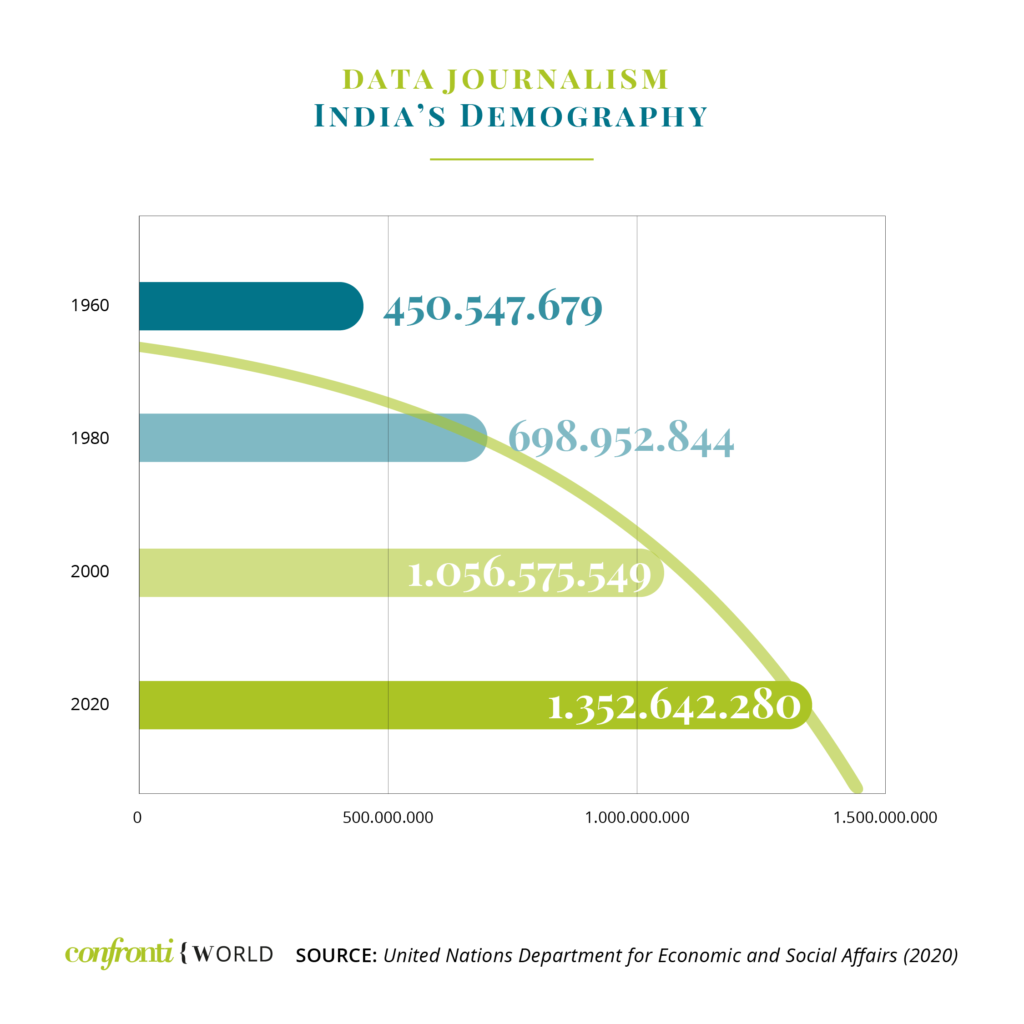 Despite this slowdown, according to the forecasts of the United Nations Department for Economic and Social Affairs, India should overtake China as the world’s most populous country by reaching 1.5 billion people as early as 2027 (when China would count around 1.1 billion people). Furthermore, according to the report, India will be one of the nine countries that alone, between now and 2050, will determine half of the global population increase, alongside the Democratic Republic of Congo, Egypt, Ethiopia, Indonesia, Nigeria, Pakistan, the United Republic of Tanzania, and the United States of America.

the percentage of world population growth in 2050.

POVERTY FALLING, WITH SOME CAVEATS

According to data from the World Monetary Fund (WMF), in 2018 India was the country with the highest economic growth rate in the world (7.3%).

According to data from the 2018 Multidimensional Poverty Index of the Oxford Poverty & Human Development Initiative and the United Nations Program, in the decade from 2005/2006 to 2015/2016, about 271 million Indians recovered from a situation of poverty.

Nonetheless, according to data from the World Clock Poverty, today there are still 50,700,122 people living in extreme poverty in India. 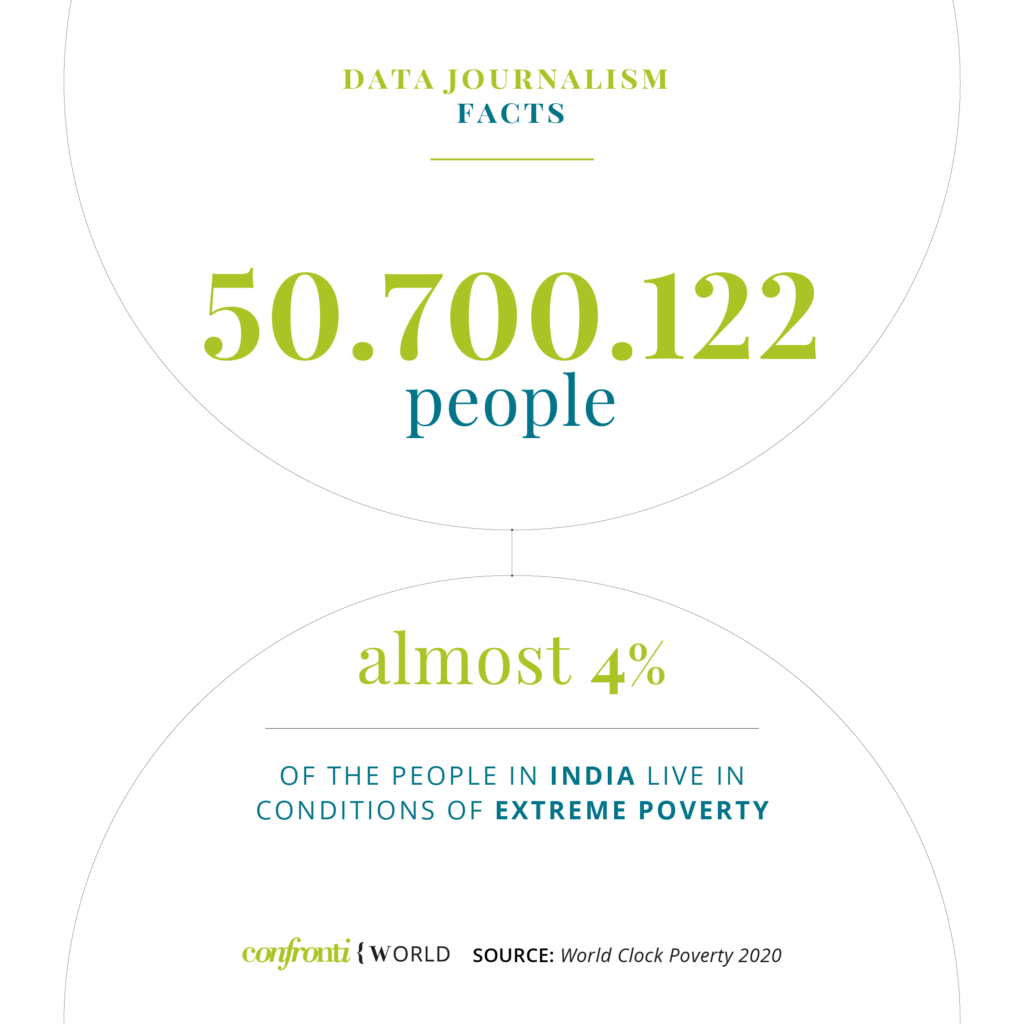 The preamble to the 1950 Constitution of India (“We, the People of India”) describes the country as “a sovereign secular socialist democratic republic.” It should be noted that the word “secular” has been included in the preamble by the 42nd Act of Amendment of 1976. In India there is no “state religion” and the Constitution (in particular Articles 15 and 25-28) obliges the tolerance and equal treatment of all religions as well as the right to practice, preach and spread any religion. Furthermore, in schools fully financed by the state, religion is not taught in the denominational sense.

In India we observe the coexistence of a “territorial law,” to which all Indian citizens are subject, and of a series of personal rights (the “personal law”) which intervene above all to regulate the aspects of “family law” which can be declined in religious terms on the basis of belonging to a certain community.

Therefore, the main religious communities not native to India (Islam, Christianity, Zoroastrianism and Judaism) each follow their own “personal law.” More complex is the situation of Hindus, Jains, Buddhists and Sikhs who are assimilated as if, on the legal level, they belonged to the same religion. In fact, Article 25, paragraph 2, letter b) of the Constitution establishes that all those who profess one of these religions are legally to be understood as “Hindu.” The Hindu Marriage Act of 1955 also defines Jains, Buddhists and Sikhs as “legally Hindu” even if they are not “by religion.” The Supreme Court of 2005 also ruled that Jains, Sikhs and Buddhists are not to be understood as belonging to a “religious minority” but to be considered “Hindu” at least from a legal point of view, although in practice the religions are to be considered as distinct. One of the consequences of this equation is that Buddhists, Sikhs and Jains cannot access social services or work and educational facilities made available by the state for other religious minorities. 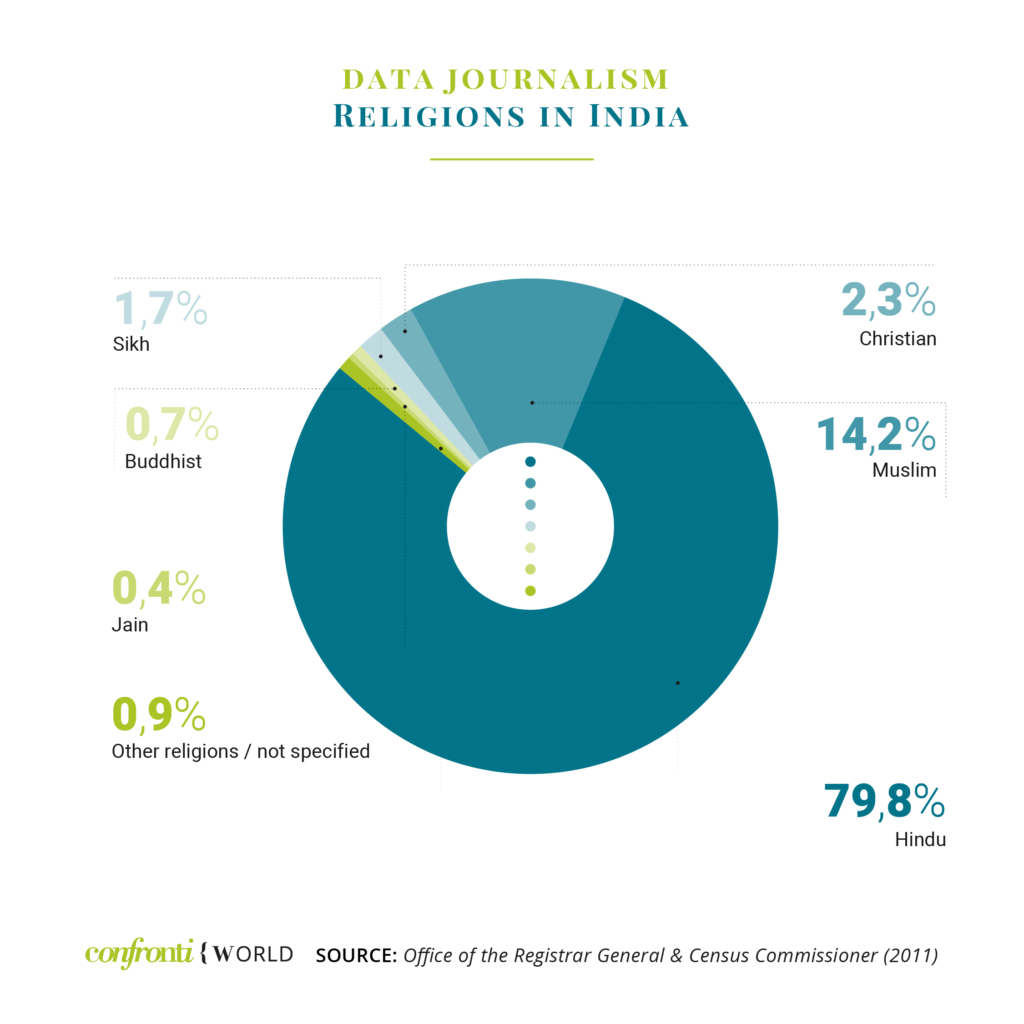 MUSLIMS IN INDIA: A SIGNIFICANT MINORITY 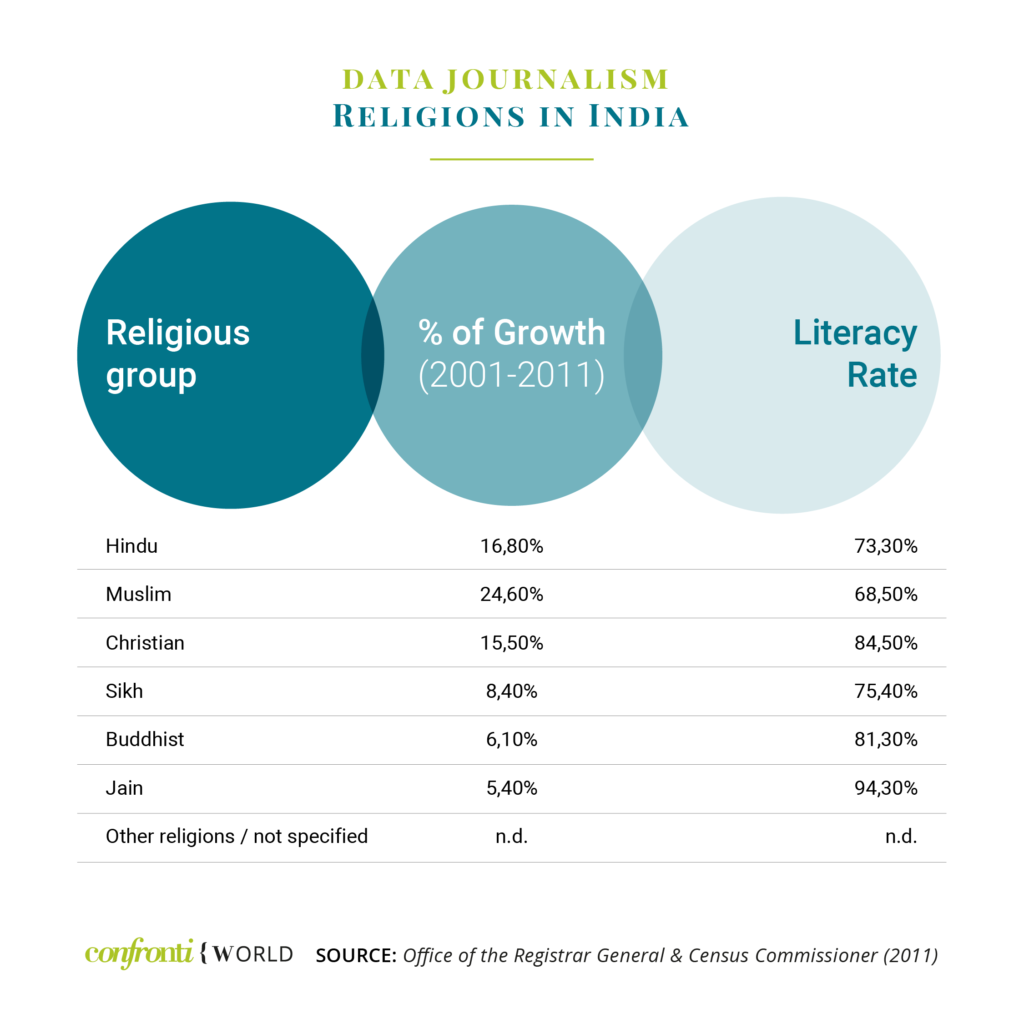 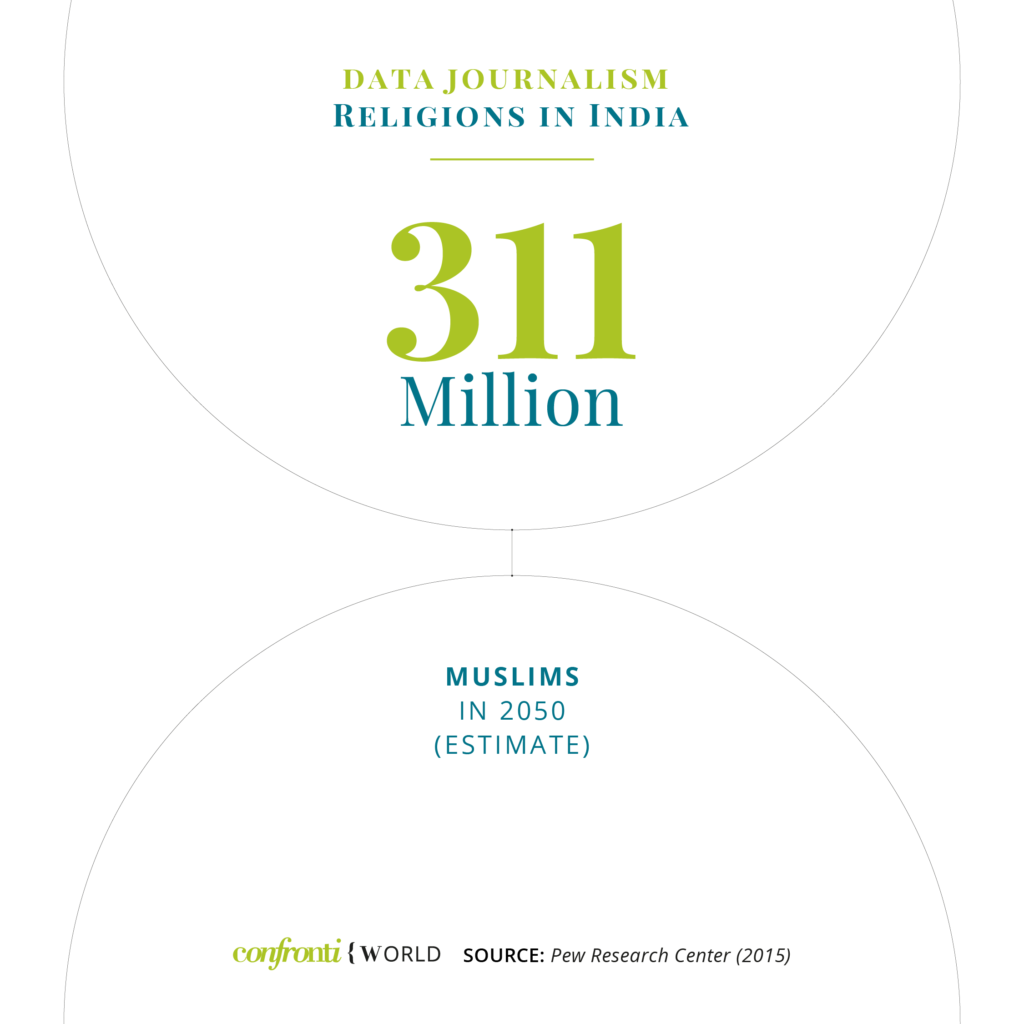 Since last November heated protests have erupted throughout India, in many cases resulting in bloody repression by the police. During the protests which lasted from 23 to 29 February in the Northeast of New Delhi, 53 deaths were counted and over 200 injured. All this is due to a controversial law, the Citizenship Amendment Act (CAA).

REACTIONS AROUND THE WORLD

The protests of Indian citizens were also joined by international voices.

The Organization for Islamic Cooperation has expressed concern about the consequences for the Islamic community due to the establishment of the CAA (concern also shared by the NGO Human Rights Watch), and also about the stigma against Muslims during the epidemic of COVID-19, as they were accused by many of spreading the virus.

In the annual report published last April, the Commission for International Religious Freedom, appointed by the Congress of the United States of America, states that the CAA, in fact, discriminates against Muslim migrants from Afghanistan, Bangladesh and Pakistan.

Commission Vice President Nadine Maenza said in a press conference that the worsening of religious freedom in India was “perhaps the most drastic and alarming” among those analyzed worldwide. The Commission also accused the ruling Bharatiya Janata Party (BJP) of “allowing with impunity the continuation of acts of violence against minorities and their respective places of worship and of tolerating hate speech and incitement to violence.”

Last fall, during the Howdy Modi event (literally meaning “How are you, Modi?” and organized by Indian-Americans in honor of their overseas premier) held last September 22 in Houston, Donald Trump defined Modi as “one of America’s greatest, most devoted and loyal friends,” also stating that Modi was doing “a truly exceptional job for India and all the Indian people.”