Home » A problem of coexistence. The fragile religious freedom in Myanmar

A problem of coexistence. The fragile religious freedom in Myanmar

Myanmar is a country with an extremely diverse ethnic composition, as demonstrated by the fact that the government recognizes 135 distinct ethnic groups. In addition, there are at least 108 different ethnolinguistic groups in the country which can be traced back to four main linguistic families: Sino-Tibetan, Tai-Kadai, Austro-Asian and Indo-European.

Myanmar is in fact a multi-religious country: there is no officially declared “state religion,” but the majority by far is Theravada Buddhism (the “school of the elderly”), which is the oldest Buddhist school among those still existing and largely dominant in South Asia and Southeast Asia.

Religion, and Buddhism in particular, plays a very important role in the shaping of politics in Myanmar. Just think of the fact that Burmese nationalism was shaped around the formation of the Young Men’s Buddhist Association (YMBA) which played a leading role in the struggle for independence (the first campaign against British domination was in 1916), and in the formation of the democratic state.

The link between religion and politics is also evident from the fact that one of the symbols of Burmese Buddhism—the Shwedagon Pagoda in Yangon–was the scene of many historical events in contemporary Myanmar. In this very place, in January 1946, General Aung San demanded independence from the British, asking for the support of the population gathered there. Independence was finally realized in 1948. Forty-two years later, on August 26, 1988, his daughter Aung San Suu Kyi stood before a crowd of more than 500,000 people to launch a nonviolent struggle for the implementation of democracy by the then-ruling military regime.

One of the most recent waves of protests in which Buddhist monks participated in large numbers was the so-called Saffron Revolution of 2007, triggered by a sudden increase in gasoline and food prices due to the disruption of government subsidies. The protests also called for democratic openness and respect for human rights from the junta in power. The government’s response was the consequent imprisonment of thousands of monks including U Gambira, leader of the All Burma Monks’ Alliance, sentenced to 68 years in prison.

Today, the YMBA identifies itself with the Myanmar army to the extent that it has conferred the title of “permanent patron” to Min Aung Hlaing, Commander-in-Chief of the Armed Forces of Burma since 2011. Hlaing was proclaimed last February to be Chief of the State Administrative Council, the executive body of the military junta, after a coup and dismissal—by the army—of President Win Myint and State Councilor Aung San Suu Kyi. 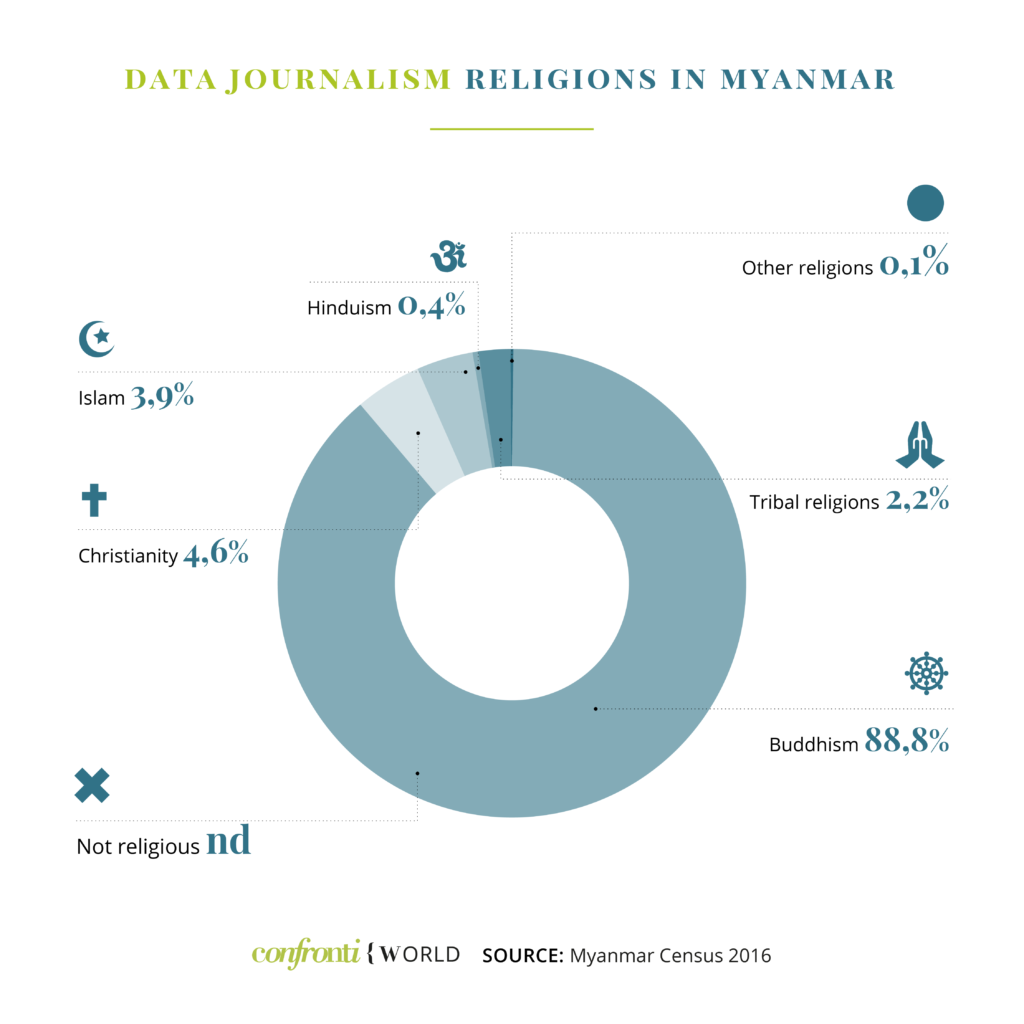 Christianity is practiced by about 6.3% of the population of Myanmar (according to the data of the last census of 2016) and they have been the fastest growing religious group in the last three decades (in 1973 the percentage of incidence on the whole Myanmar’s population was 4.6%). About four fifths of the country’s Christians are Protestants, in particular Baptists (the first mission in the country was in 1813) of the Myanmar Baptist Convention. Then follow the members of the Methodist Church (The United Methodist Church, Lower Myanmar Methodist Church), the Anglican one (Church of the Province of Myanmar), and other denominations of the Reformed Church (Church of Christ in Thailand, Mara Evangelical Church). Roman Catholics make up the rest.

Hinduism is currently practiced by 0.5% of the population but in ancient times it was widespread in the country, so much so that it left evident traces in the toponyms (the English term Burma, with which the British indicated the region, derives from Brahma: one of the three “persons” of the Hindu “trinity”). Most Hindus in Myanmar are the so-called “Burmese Indians”, a term used to indicate the ancestors of the people who emigrated to Burma from India and neighboring countries from the beginning of British rule (mid-19th century ) until the separation of British Burma from British India (1937). After independence from Great Britain, the Socialist Program Party of Burma under Ne Win (President of the Burmese Revolutionary Council and Prime Minister of the Revolutionary Government from 1962 to 1974 and President of the Socialist Union of Burma from 1974 to 1981), between 1963 and 1967, it adopted xenophobic policies and expelled about 300,000 people of Indian ethnicity (of Hindu and Buddhist religion) and about 100,000 people of Chinese descent from the country.

To get an idea of ​​the extent of the persecutions of those years, it is enough to consult the official data of the censuses of 1931 and 1973: in this period of time we are witnessing a decrease in the Hindu population of 79.7%. It is only since the 1990s that there has been an improvement in the acceptance of Hindu people (and other ethnic-religious minorities) within Burmese society. Nevertheless, episodes of intolerance towards this ethnic-religious group are still found in recent years. Sadly known was the case of the so-called Kha Maung Seik Massacre (25 August 2017), during which about 99 Hindu people were killed following an attack by the Arakan Rohingya (Arsa) Salvation Army. 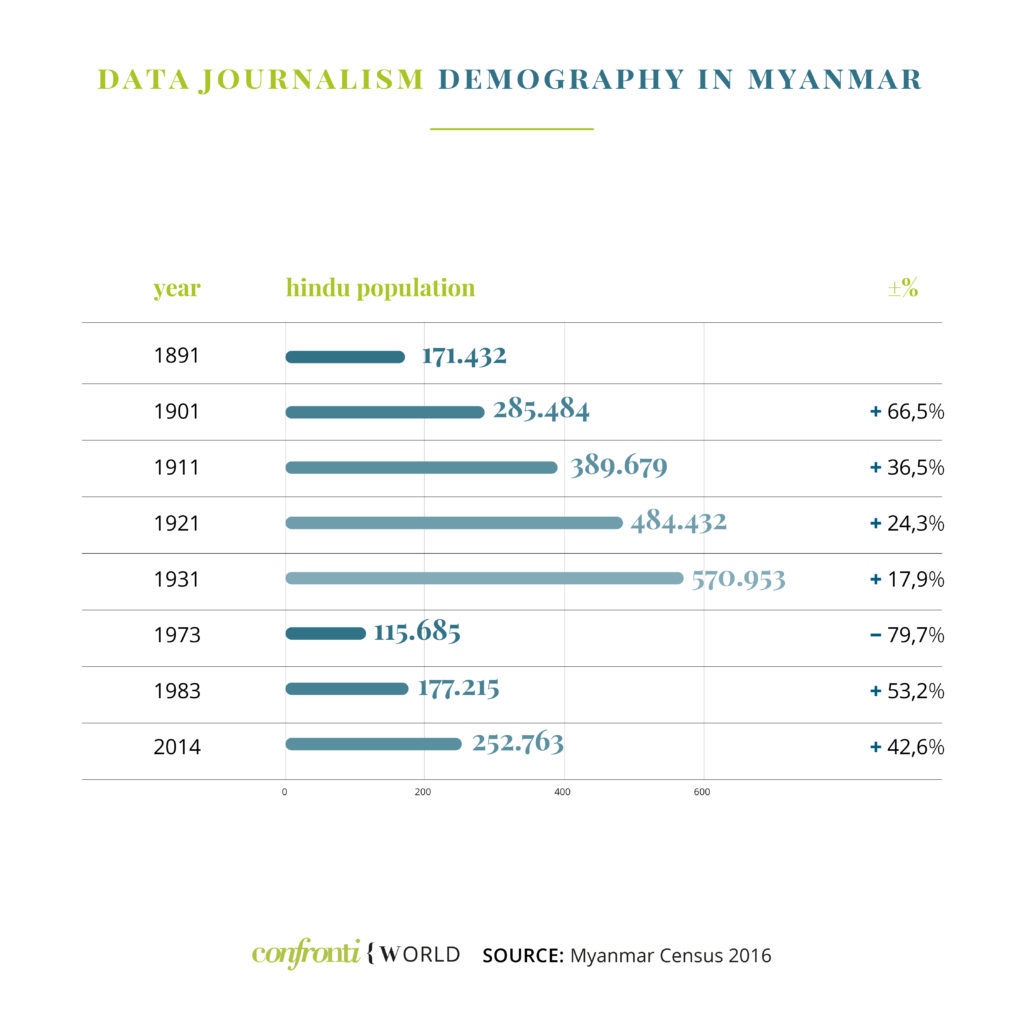 Islam, mainly of Sunni orientation, according to the 2016 census data, is practiced by about 4.3% of the population. The Muslim minority has long been the target of ethnic-religious persecutions that many governments, of different “colors”, have continued since the establishment of the independent state. Suffering from this situation is mainly the Rohingya population, an ethnic group with a Muslim majority that today has about 800,000 people concentrated mainly (80%) in the state of Rakhine.

With independence from the British Empire, the 1948 Constitution granted Burmese citizenship to both Rohingya and Muslims whose ancestors came from India and Bangladesh. Then, after the military coup of 1962 their status was downgraded through the so-called Emergency Immigration Act of 1974 which required all citizens to have a new identity card (the National Registration Card), based on ethnicity and from which Rohingya were excluded and consequently awarded the Charter of  foreign registration. This happened despite the new version of the 1974 Constitution described as illegal any kind of religious exploitation.

The situation worsened further with the Citizenship Act of 1982 which stipulated that anyone wishing to obtain citizenship had to belong to one of the 135 “national ethnic groups” recognized by the Constitution or to prove that their ancestors had settled in the country before 1823. Given the lack of documentation to meet the latter requirement, most Rohingya were not granted citizenship and became, in effect, stateless. Since then successive governments have implemented discriminatory policies against the Rohingya and the Muslim population in general. Given their “non-citizen” status, the Rohingya are not guaranteed education, access to the labor market or basic social services. Even the right to marry is effectively hindered, as to get married they have to apply, through a procedure that can take years, for a series of authorizations before obtaining a “marriage permit”.

But the persecutions against the Rohingya and Muslims go even further. In 2001 Buddhist monks spread anti-Muslim pamphlets among the population in the town of Taungoo (division of Pegu) (one of the most widespread has the title The fear of losing one’s race), provoking their reaction, which leads to the killing of about 200 Muslims, the destruction of 11 mosques and the burning of over 400 houses. From 2012 to 2018, persecutions of Rohingya were reported in the state of Rakhine perpetrated by the army, police militias, the Buddhist population as well as central and local authorities. A UN-commissioned fact-finding mission found sufficient evidence to call for the investigation of senior military officials for crimes against humanity and genocide against ethnic Rohingya Muslims.

The final report released in September 2019 found that the 600,000 Rohingya remaining in Rakhine State were still the target of a government campaign to eradicate their identity and were living under the “threat of genocide”. The report also found that the laws, policies and practices that underlie the government’s persecution of Rohingya – and that serve as causative factors for killings, rape and gang rape, torture and displacement. forced by the military and other government authorities – were still in place. Following these investigations, on 11 November 2019, The Gambia appealed to the International Court of Justice claiming that Myanmar had violated its obligations under the 1948 Genocide Convention asking for “interim measures” to be taken to prevent any act that could equal or contribute to the crime of genocide against the Rohingya and protect the community pending the sentence. During the public hearings, held in The Hague from 10 to 12 December 2019 – the Myanmar delegation, led by Aung San Suu Kyi, state councilor and de facto head of state, rejected the accusations of genocide.

On 24 March 2021, the UN Council adopted by consensus a resolution on the violations of human rights underway in Myanmar since the military coup of 1 February last. The resolution renewed Tom Andrews‘ mandate as UN Special Rapporteur on Myanmar, appointing him together with the Office of Michelle Bachelet – the United Nations High Commissioner for Human Rights – to closely monitor what is happening in the country. The resolution, based on the report presented in September 2019 by the Fact-Finding Mission, also recommended that companies present in Myanmar or that have business ties with the country not to carry out any economic activity that could favor the military or the companies it owns. owned or controlled.

Founded in 2000 by former political prisoners living in exile on the border between Thailand and Burma for the purpose of advocating for the release of remaining political prisoners and assisting former prisoners in their new life as free men and women, the Association for the Assistance to Political Prisoners in Myanmar reports that, as of April 14:
– over three thousand people have been arrested, accused or sentenced during the protests;
– an arrest warrant was issued for another 756 people;
– 715 people were killed in clashes with the police and the army;
– 66 people have been convicted.

Myanmar, A Project for Agriculture and Education

The Lady, The Peacock and The Shattered Dream of Myanmar