Home » Apeirogon. A book with a thousand and one perspectives

Rami Elhanan and Bassam Aramin live in parallel worlds, separated in many ways. Rami is Israeli. Bassam is Palestinian. Their everyday lives are marked by walls, checkpoints and dividing barriers until both men lose their daughters. Smadar, thirteen, is killed by a Palestinian kamikaze while shopping with her friends; Abir is killed by a member of the Israeli border police outside her school.

This huge tragedy represents a decisive turning point in the lives of the two men. Instead of seeking revenge for the tragedy that has befallen them, they decide to break the “circle of blood.” Both join the binational organization Parents Circle Families Forum. It is in this context that Bassam and Rami recognize each other’s pain, become friends and decide to use their common pain as a weapon for peace. he author of Apeirogon, Colum McCann, structured the narrative into 1001 “rooms” that recall the Thousand and One Nights of Shahrazad’s tales, delivering a story that is both poignant and full of hope.

How did you come up with the idea of writing a novel based on the personal stories of Bassam and Rami?

Almost six years ago I went to Israel and Palestine with a group from two of my favorite non-profits, Narrative 4 and Telos.  There was a big group of us and it was a whirlwind trip but we got to visit with several different people – Israeli writers, Palestinian musicians, settlers, soldiers, artists, security experts.  It was an incredible trip, brilliantly curated and deeply nuanced.  And on my second-to-last night we went to the town of Beit Jala, just outside Jerusalem. We walked into this little office, up a rickety flight of stairs.

These two men were sitting there and they introduced themselves as Rami and Bassam.  Ordinary men in an ordinary place – or so it seemed at that initial moment.  And then they began to tell me about their daughters, Smadar and Abir, both of them lost in the conflict.  I have to tell you, they pinched every ounce of oxygen from the air.  It seemed to me like it was the first time they had ever told the story.  Of course it wasn’t.  They had told it hundreds of times before.  But I was deeply moved and forever changed.  And I knew fairly early on that I wanted to write about them.   I knew it was risky and it would take some time, but I like risk.  But nobody risks more than Rami and Bassam.  I wanted to honor their sense of risk. 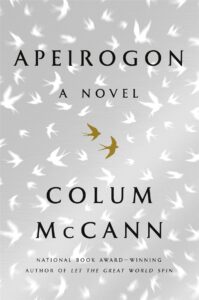 How much fiction and how much reality can we find in your book?

It’s all fiction and it’s all reality too!   I don’t want that to sound like a cop-out.  But it is a novel and it’s all true at the same time… or at least I think so.  It had to be called a novel, even though it is largely non-fiction.  This is because I wanted to dwell in the hearts and the heads of these larger-than-life characters, Rami and Bassam.  I wanted to inhabit the spaces beyond the facts.  To get to the elemental, human truth.

In mixing fiction and non-fiction, I try to go to the heart of what’s true and what’s not true.  And, let’s face it, this is really the question of our times.  This whole idea of “fakeness” and “fake news.”  Truth, post-truth.

The relationship between fiction and “truth” has always been complicated, but even more so nowadays.  Where do we draw the line?  I have said before that facts are mercenary things.  They can be manipulated and shipped off to do whatever work you need them to do.  But the deeper truth relies on the human heart – and the human heart is a messy and constantly evolving place.And given the fact that truth is messy, we sometimes have to invent new forms, which is what I tried to do with Apeirogon.

The Apeirogon is a geometric shape.. You use this image to define the Israeli-Palestinian conflict. Can you explain to us your point about this issue?

An apeirogon is a shape with a countably infinite number of sides.  It sounds crazy and impossible and beautiful all at once – and it is.  You can be part of an infinite shape and land on any finite point within it.  I stumbled upon the word when I was writing a novel called TransAtlantic about ten years ago.  I was looking for a word to suggest infinite sides.  I tucked it in my back pocket and I knew immediately that it would be the title.  Some people tried to talk me out of it, but I thought it was perfect.  And I’m really proud of my Italian publishers for having the bravery to stick with it.  I knew it would be a tough title.  But it would also be unique.

How did growing up in Ireland affect the way you looked at the conflict in the Middle East? In your opinion, can the Irish model be somehow inspiring to trigger a peace process in that area too?

You know, when I was in Palestine, I walked through several checkpoints.  But I had also walked through checkpoints as a child in Northern Ireland.  And I think that having spent a lot of time in Northern Ireland was very important to me.  Also, having seen the Irish peace process in close-up (completed in 1998) was helpful in my understanding of what was going on in the Middle East.  And so when I went there, I could recognize the various forms of grief.  And it became something to honor, yes, to pass along.  And I could recognize the force of language as a weapon too.  And I could recognize the lies and the half-lies.  But I could also recognize the heartbreak.  I’ve always been a listener.  I hope it doesn’t sound like a cliché but this story found me.  And one of the reasons it found me is because I am Irish.

Parents Circle Families Forum is an organization made up exclusively of Israeli and Palestinian families who have shared the fate of seeing their families die from the conflict. They are also families who did not want to react to the trauma of mourning with revenge and hatred, but preferred to seek dialogue and reconciliation with each other, to stop the bloodshed and work in favor of peace.

The organization was born in 1995 on the initiative of Yitzhak Frankenthal, whose son Arik had been kidnapped and killed by Hamas affiliates the previous year. Today, six hundred Israeli and Palestinian families are part of it, leading joint action to build peace. There are many activities promoted by the association: dialogue meetings for young people from the two communities, public meetings between the families of the victims, solidarity actions and educational programs with the involvement of the two parties, and a website with Arabic and Hebrew versions. The Facebook community Crack in the Wall, which has over 28,000 members, works to create a “crack in the wall,” engaging Palestinians and Israelis in dialogue and providing a platform to express themselves in their own language, which is then translated into the other.

Colum McCann, originally from Dublin, is the author of six novels and two short story collections. His most recent novel, the bestseller Let the Great World Spin, won the National Book Award, the International IMPAC Dublin Literary Award and many other major international awards. His fiction works have been published in thirty-five languages. He lives in New York.